​The word sabaki is a Japanese verb meaning to move or maneuver. And in Sabakiball that is exactly what you do, all of the time! Unlike other sports, when a ball goes out of bounds... don't stop playing, a goalie has just 3 seconds to throw a new ball into play. But that's not all! The goalie in Sabakiball plays offense as well as defense, all other players are never offside, and the play never stops for more than 3 seconds! Oh, and by rule, Sabakiball is the absolute ultimate team sport, where ball-hogs and hot-dogs actually keep their team from scoring. Now, some people (those who have never played Sabakiball) have said that the sport resembles Team Handball. The truth is that Sabakiball is like Handball in the same way that Football is like Rugby, or Lacrosse is like Hockey. It may appear similar in some ways, but just ten minutes on the court and you will feel the difference! One of the reasons for Sabakiball's rapid growth is the non-stop action of the game and it is strongly encouraged that schools and league organizers gain the most benefit and fun from the sport by adhering to the basic rules of play and using Official Sabakiball equipment.
The Equipment 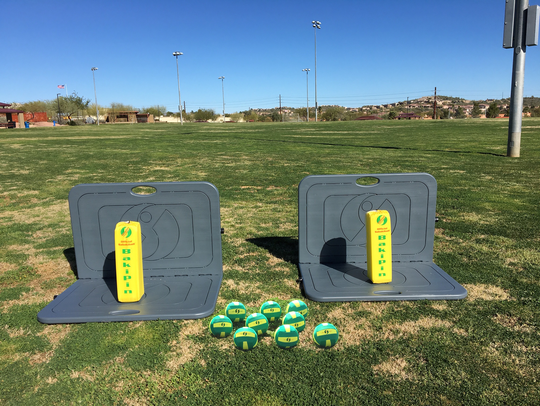 The BakiBall is small and soft making it perfect for even the most ball-shy players. Its design also helps to ensure that a player's fingers are always on a seam when attempting a pass or shot-on-goal.

The BakiPin goal-pin is also soft and has a carefully measured sand-bag bottom to keep it standing and to make sure that, while it is not difficult to knock down, you do need to strike the goal-pin solidly in order to score.​

The BakiBoard backboard is an important part of the sport. Because it is easy to protect the BakiPin from direct attempts to knock it down, the BakiBoard allows players to utilize bank-shots in order to score more often. Another reason for using the BakiBoard is that the Back Court, or area behind the BakiBoard, is vital to offensive and defensive strategies and makes the goalie position the most endurance-oriented position on the court.
​The Object of the Sport

The Basic Rules
The following rules are the fundamental elements of the sport, and will suffice for most games being played by youth organizations. ​

Starting and stopping the game. The game starts out with a jump-ball at center court, similar to basketball. Players may either grab or tip the ball to their teammates. On subsequent stops in play, the referee will point to the goalie that starts with the ball. Whichever team had "last touch", the opposing team starts with the ball. Their goalie has three seconds to retrieve a new ball from behind the BakiBoard and step into their goalie box. The referee now blows the whistle to start play, giving the goalie three seconds to release the ball. Don’t chase after balls that go out of bounds. Sabakiball is a non-stop action sport!

Three Pass Rule. A team must complete a minimum of three consecutive passes before attempting a shot on goal. If the ball hits the ground for any reason, or if the other team gains possession of the ball, you must start your three passes all over again. It is important to remember that, while you can move the ball up the court in any way you wish; running, dribbling, passing, even using your feet, if the ball touches the ground you start your three passes over again. Also, a ball on the ground is called a scrum and any player may grab the ball gaining possession for their team.

Goalie Box. In front of each BakiBoard is a clearly marked Goalie Box. Players other than the goalie can not reach in, step in, or run through the Goalie Box. In fact, when a player takes a shot on goal, their arm can not go over the Goalie Box line as they release the ball. Entering the Goalie Box results in the ball being given to the other team at mid-court and a warning is issued. After a third warning, a two minute penalty is assessed and the team has to play short-handed.

Sabakiball is a NON-CONTACT sport! You can not knock people off of the ball and you can not strip the ball away. Block the ball, intercept the ball, if the ball is on the ground (called a scrum) go and get it. But, watch the contact!

Remember, keep moving! In order to find an open receiver within three seconds, and to complete your three passes allowing for a shot on goal, all of the players must be continuously moving into open spaces on the court.  Above all… HAVE FUN!